Uncategorized by bpender on July 5, 20160 Comments

I hope everyone enjoyed the three-day weekend! We have 14 games on our hands today and it’s going to be a wild one. We have Bumgarner on the mound – then after that it gets tricky. I’ll be targeting my top GPP stacks and pitchers on today’s slate, so lets get right to it! 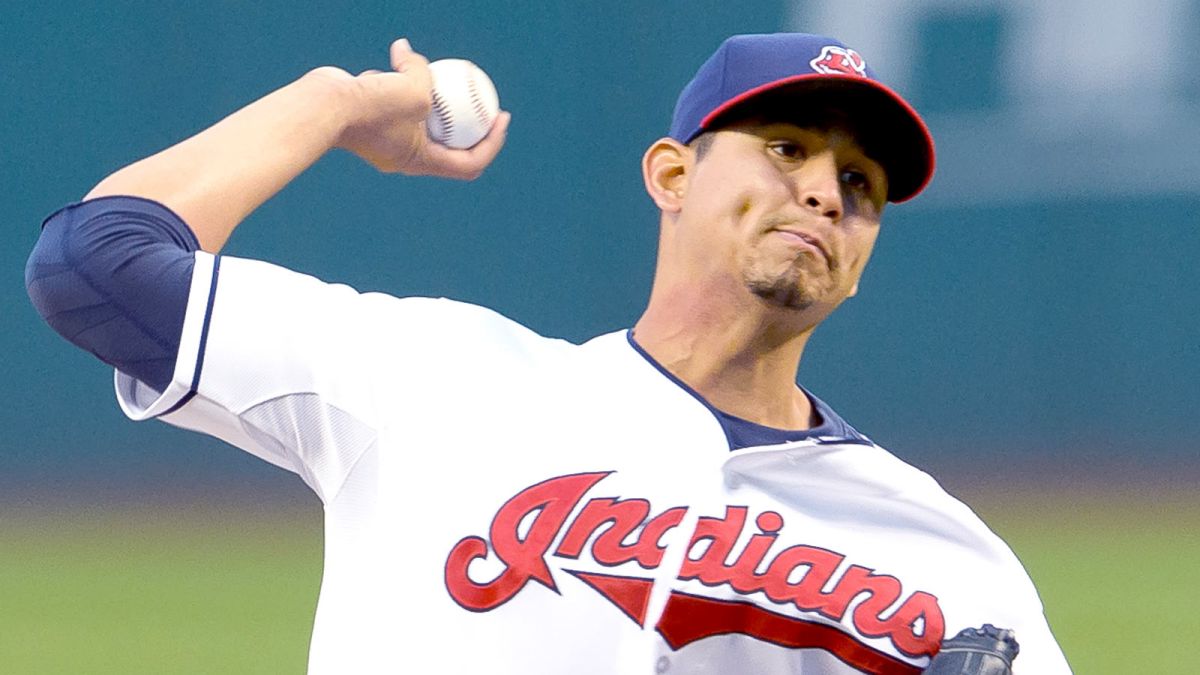 Don’t forget to check out our free MLB research tools and our premium fanduel and draftkings lineup optimizer for MLB, complete with DFSR and Razzball projections. Get started for free with our 3-day trials!

One route that I would strongly consider taking for tournaments is Carlos Carrasco. He is one of the most dominant pitchers in the game today and will be going up against a Tigers’ squad that strikes out quite a bit (22.4 K% 7th in MLB) against right-handed pitchers. I honestly think Carrasco has the highest ceiling on the night, so I’m all in on the 29-year-old for tournaments.

Not only do the Tigers strikeout a ton, but Carrasco also does some fanning of his own. He is coming into this contest sporting a 25.4 K% to go along with a 1.06 WHIP. This guy is the real-deal and is the best option for tournaments on tonight’s slate.

Looking for a cheaper SP2 option? Then I recommend going with Masahiro Tanaka. He will be pitching on the road today going up against the Chicago White Sox. Not only is this a good matchup for the Japanese phenom, but it also gives him a nice ballpark boost. On the year, the White Sox own a .307 wOBA (23rd in MLB) and 21.3 K% (13th in MLB) against right-handed pitchers. He isn’t a guy with huge upside, but he’s got a lot of things going for him tonight and I expect him to deliver a quality start.

Oakland Athletics vs. Tommy Milone (MIN)
Update
The weather at Target Field is looking, well, not so good. Keep an eye on things with our mlb weather page here, and here’s a screenshot of the current forecast: 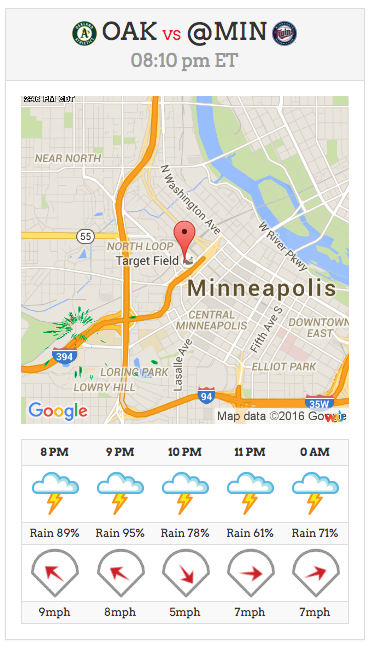 I know the Athletics aren’t a team that you tend to stack on a day-to-day basis, but I love them tonight. I’m not sure if it’s because they will be going up against Tommy Milone or the fact that they eat left-handed pitchers for breakfast. What the heck — I love them for both of those reasons.

Tommy Milone is a southpaw that has had his share of struggles this season since returning from the DL. He is sporting a 6.23 ERA that is backed up by a 5.31 FIP. That is all very appealing when looking to stack against a pitcher, but there is one thing in particular that stood out the most to me. And that was opponents hard contact rate against him. They own a 40.0% hard contact rate, which explains why his FIP and ERA are so inflated. Things have been ugly and going up against the A’s (.179 IS0 vs. lefties) sure isn’t going to help him out.

The Indians have been killing it! There are no other words to describe what they are doing. They have been on a rampage since the the NBA Finals; so don’t mess with the tribe! A 14-game win streak is no joke (snapped over the weekend) and I’ll have some exposure to these guys, as they will be going up against Anibal Sanchez.

Sanchez was a spectacular ballplayer in his prime — but he’s no longer in his prime. He’s 32 years old and has struggled mightily. He sports a 6.05 ERA that is backed up by a 5.24 xFIP. One of the key issues for Sanchez has been control and command in his pitches. He owns a 10.0 BB% to go along with a 17.9 K%. The stuff just isn’t there anymore for the veteran, so look for the red-hot Indians to have themselves a night — yet again!