Why Use a Lineup Optimizer?

Uncategorized by bpender on June 20, 20160 Comments

We first started experimenting with DFS optimization just a few years after Fanduel, and thus Daily Fantasy Sports, hit the scene. The original question was simple, but hard to solve:

Given a salary cap, how can I squeeze the most points possible into one lineup?

This problem required some thought, but before sinking our teeth into this math problem we decided to take a step back and ask a different question:

By now I’m sure you aren’t surprised to hear us say a resounding YES. Lineup optimizers are a foundational tool for successful daily fantasy players. But how did we arrive at this conclusion?

When studying algorithm development, the Knapsack Problem is a well known & well taught mathematics / computer science problem. It is considered a ‘classical algorithm’. The original knapsack problem goes like this: You have a backpack (knapsack) with a certain weight capacity and several objects to choose from. Each object has a value and a weight. The goal is to fill your backpack with the right combination of items to maximize the total value, without exceeding the weight limit. 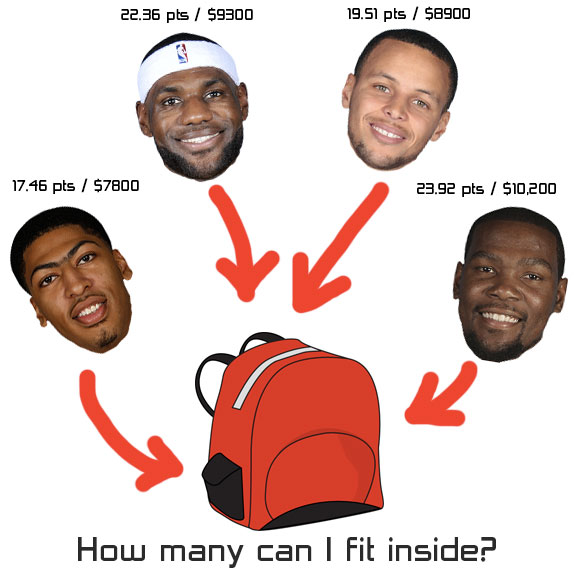 This is what a lineup optimizer does.

The DFS lineup optimization problem is very similar but with a few key differences:

Lets talk about the second bullet, the unknown value of each player. Now if we know each item’s value with certainty, then we know exactly what we are getting in the end. But in DFS, each player’s value is estimated. Their value is their projected fantasy point value.

We optimize our lives every day using estimations. When you use Google maps for directions the system uses an algorithm to determine the best path given many uncertain values. Namely, traffic. We cannot always predict traffic with 100% accuracy, but we can make some damn good guesses given historical data. Has Google ever sent you straight into a traffic jam? Yes. Do you throw your cell phone out the window and say I’m doing this manually from now on! Of course not.

(The thought may have crossed your mind but we all know that using an algorithm, even if based on estimations, is still better than using just our poor ol’ human brains.)

Just like traffic, in sports there are unpredictable events. Injuries, weather, emotions, a bird flying directly into a 99mph pitch, and more. But by using historical data and incorporating the variables of that day, we can come up with some very good predicted values for each player. This is what a great daily fantasy sports projector does. And if we optimize those projections we can create a significant competitive advantage. In daily fantasy sports, finding an edge when constructing lineups is paramount.

Lineup Lab does not backtest for bird strikes.

Great projections need great optimization, and vice versa. This is why we decided to partner with the best projection providers in the industry instead of generating projections ourselves. Great projections require great attention to detail and the guys who do it best, love their respective sports. (Like Razzball for MLB, 4for4 for NFL, and DFSR for NBA)

Think about the variables that go into MLB projections (wind, pitcher stats, hitter stats, park factors, umpire bias, lefty/righty matchups, platoon splits, etc). Are these components even remotely similar to the ones that go into NFL projections? Of course not! Unless the baseball guy also lives and breathes football (and yes, those guys exist!) he’s going to be far better in one sport vs the other. Honda and Ford both make cars, but which shop are you going to take your Honda to? (cheesy, I know… but accurate!)

The same is very true in DFS. We let our projection providers focus on the sport that they love and know, while we focus on the lineup optimization algorithms. Together, this is how you create a top-notch daily fantasy lineup optimizer for ALL sports.

We’re not quite finished! Lets look at the final math to see why a daily fantasy lineup optimizer is important.

Take me back to the Lineup Lab homepage -> https://www.lineuplab.com